Endowed with tradition and beauty, the Academic Building has been a familiar campus landmark to Aggies since its construction in 1914. Read on for a compilation of facts about this iconic building!
1. UNTIL 1931, PREXY’S MOON SAT ATOP THE ACADEMIC BUILDING’S DOME, LIGHTING CAMPUS AT NIGHT.
One of the Academic Building’s most recognizable features is its oxidized copper dome. During the initial years following its construction, Prexy’s Moon could be spotted atop the dome. A small light, Prexy’s Moon lit the path for students making their way across campus at late hours. Its unique name derived from slang term ‘prexy,’ which referred to the president of the college. Although it added to the building’s ambience, administration was forced to remove Prexy’s Moon in 1931 ­due to a growing tradition among cadets of using the lamp for target practice. After World War I, many Aggie cadets still carried live ammunition around campus. Without much else to do on the weekends, they held shooting contests, thus leading to constant repairs of the light. Today, Prexy’s Moon resides in the Mayo-Thomas Room of Cushing Memorial Library and Archives. 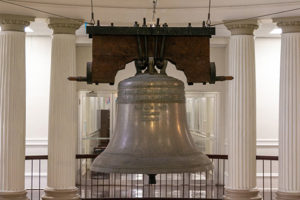 2. A REPLICA OF THE LIBERTY BELL CAN BE FOUND IN THE ACADEMIC BUILDING’S ROTUNDA.
In 1950, the United States Department of the Treasury selected Paccard Bell Foundry to cast 55 full-sized replicas of the Liberty Bell. The bells were shipped as gifts to U.S. states and territories and the District of Columbia to be displayed and rung on patriotic occasions. Many states chose to place their replicas in their capitol buildings; however, the Texas governor at the time, Allan Shivers, entrusted the state’s replica to Texas A&M at an Independence Day ceremony in recognition of Aggie contributions during World War II. He famously stated that, “No one suffered more than the Aggies, so we will give it to them.” More than 20,000 Aggies fought in World War II with about 14,000 of them serving as officers; 953 died in service. The one-ton bell, which is mounted in the rotunda of the Academic Building, has rung out only on a few special occasions to remind past, present and future Aggies of the sacrifices that have been made before us.

3. THE TEXAS A&M SEAL IS EMBEDDED AROUND CAMPUS, BUT THE SEAL ON THE FLOOR OF THE ACADEMIC BUILDING FOYER MIGHT JUST BE THE MOST DISTINCT.
Aside from the Liberty Bell, the Academic Building’s foyer is dominated by a mosaic installation of the Texas A&M University seal that was donated by the Class of 1978. The Texas A&M seal was created by Joe Hutchinson, a former associate professor of environmental design. During his artistic career, Hutchinson designed and fabricated mosaic murals, sculptures, stained glass windows, and fountains for banks, schools, churches and businesses. The Academic Building seal is comprised of glass ceramic tiles on the floor, each of which were hand-laid by Hutchinson and his assistants. If inspected closely, missing tiles can be spotted here and there in the otherwise beautiful design, caused by previous heavy foot traffic over the seal. Today, a barrier surrounds the seal to preserve its integrity.

4. THE ACADEMIC BUILDING WAS BUILT ON THE SITE OF THE FIRST CAMPUS BUILDING, OLD MAIN, AFTER A FIRE LED TO ITS DESTRUCTION.
As one of only seven buildings on campus to be more than a century old, the Academic Building stands as a testament to Texas A&M’s history. The Academic Building was constructed on the site of Old Main following its destruction by fire in 1912. At the time of the fire, Old Main housed the offices of the university president and commandant, the exchange store, library and athletic department, and other classrooms and archive offices. Construction of the new Academic Building was led by Dr. Frederick Giesecke (Class of 1886), a professor and founder of the first formal architectural program at Texas A&M. Giesecke played a role in designing many iconic campus buildings, such as Sbisa Dining Hall, Cushing Library, the Jack K. Williams Administration Building, Hart and Walton Halls, and many others.

5. SILVER TAPS IS HELD OUTSIDE THE ACADEMIC BUILDING.
Silver Taps, one of the most sacred and significant traditions at Texas A&M, is one of the final tributes for any current graduate or undergraduate student who has passed during the year. This revered tradition was first started in 1898 when a Silver Taps ceremony was held for Lawrence Sullivan Ross, former Texas governor and president of the college. Old Main was the original site of the Silver Taps ceremony until it burned down in 1912. Today, Silver Taps is held the first Tuesday of the month following a student’s death. Members of the campus community gather in Academic Plaza and face the Academic Building as Buglers play a special rendition of Taps from the building’s dome. The buglers play “Taps” three times: once to the north, once to the south and once to the west, but never to the east, because it is said the sun will never rise on that fallen Aggie again.